How a footy tournament in Kolkata became a ‘movement’ 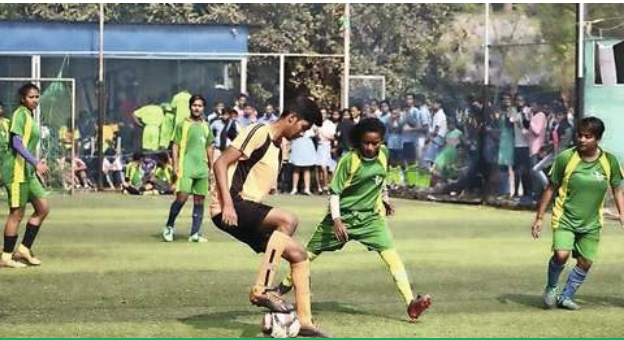 ‘Football is not just a game for these girls – it’s a game-changer’, says NGO president and event co-sponsor Arjun Dutta

Sixteen-year-old Surajmani Tudu hails from a “backward region in the West Midnapore district of West Bengal” and often subsists on meals of rice and ant eggs, together with her farming family – but she emerged as the highest scorer during a recent mixed gender football tournament. [The runner-up was a boy, seven goals behind.] Kajal Singh, a 12-year-old from a suburb outside Kolkata, lives with an abusive stepfather and an HIV+ mother and brother, but the same tournament saw her gain enough confidence to captain her team to victory.

These are just some of the incredible stories of success and transformation that came out of what organisers are billing India’s first mixed gender children’s football tournament. Held in Kolkata in December last year, the match – which was organised by event planners FunPickle – saw 48 teams come together from all over eastern India to play ball. The highlight? For the first time, boys and girls would play as equals on the field. But while the idea was pioneering in itself, the win went far beyond scores and cash prizes when village kids found themselves having to surmount all manner of challenges – even assault – in order to get to the playing field.
Excerpts from an interview with Arjun Dutta, president of NGO Calcutta Social Project that co-sponsored the event, follow:

Why football? After all, it’s not the sport India is best known for.
We work with underprivileged children. The reason we zeroed in on football is because our organisation’s mission is to pick up children from streets and slums and mainstream them into being productive citizens. For that, we’d need to give them education and skills. Unfortunately, though they live underprivileged lives, these kids are also accustomed to a degree of freedom, of doing whatever they please. So, when they come into our fold, they do so with a total lack of discipline, plus a deep-rooted sense of inferiority, which manifests in aggressive behaviour. It’s very difficult to initiate them into the educational process without first building up a certain level of confidence. The easiest way we’ve found we can do that is to enroll them in activities of interest: sport or dance and music. Very often, it is through sport that they discover they’re good at something for the first time. It gives them the confidence to attempt studies and skill development, and kicks off a reconstructive process. Why football? Because it’s the cheapest sport – all you need is a ball.

For many in this part of the world, football is but a game. What does it mean for the girls you work with?
Football, for these girls, is a game-changer. All our girls have a similar story to share, but let me tell you of one of our street children. Even among street kids, she comes from a more deprived background, and her parents cannot even live on the same side of the pavement. She was very defiant, refusing to go in for anything that would improve her. We enrolled her into the team as a goalkeeper, and after a couple of games, there was one point when she lunged for and caught the ball. Somewhere, that changed something in her. That kid has now started doing well in studies, even taking up public speaking to deliver little speeches in front of hundreds of people.

We’ve heard of how football brings the world together – a slogan commonly heard when FIFA rolls around. Have you seen this play out in the more micro-context of villages as well or is it a different story there?
It’s still a different story in villages as far as girls are concerned. In many villages, it is still not acceptable for girls to be playing ball – but I also think the scenario is changing very rapidly. I think it will be a non-issue within one or two years. As one of my colleagues observed, our initiative is not just a tournament – it is a movement, and it will do more for girls’ empowerment than anything else. So, we will definitely be looking to build on this vision for sure. There will be some resistance initially – but gradually, we believe it will catch on.

Did you face any such resistance while organising this tournament?
Yes. It’s a pity that one of our teams from Mallarpur district in Birbhum faced much opposition from parties with vested interests who were against their participation in this tournament. The local village authorities did not want girls playing football. The players were beaten up and even jailed for daring to participate, but despite not being able to practise, they snuck away from the village and made the journey to the tournament anyway. They didn’t win but we made it a point to share our prize money with them when we won. Their courage beat our prowess on the football field.

What were some of your own learnings from the event?
Primarily, it was a surprise to see how good some of the players from remote villages were. We came to understand why it’s the Tier II or Tier III cities of India that are throwing up sports stars. That was one takeaway, and we carefully studied the kids coming from interior regions. The other learning was the enthusiasm and good spirit displayed by all the participating teams. All the organisers were really proud of this: that we had 48 mixed teams from ‘not-so-genteel’ backgrounds and there were no instances of misbehaviour at all. No disputes, no arguments – none of the stuff we associate with football. But the biggest takeaway, perhaps, was when a girl scored the maximum number of goals. It reaffirmed for us that, very soon, all of India would accept football as a gender-indifferent sporting game.

What are your thoughts on the role of women in the lives of underprivileged girls? How can those in bigger cities help?
These young girls from such deprived backgrounds have horrendous stories of abuse and molestation. So, we have a real need for counselling expertise – something that we are very short on. I would encourage anyone who is skilled in counselling to take the time to offer their services to these girls. We can give them shelter and a safe space to grow up with their peers, but we’re finding our resources in professional counselling to be in real short supply.
karen@khaleejtimes.com